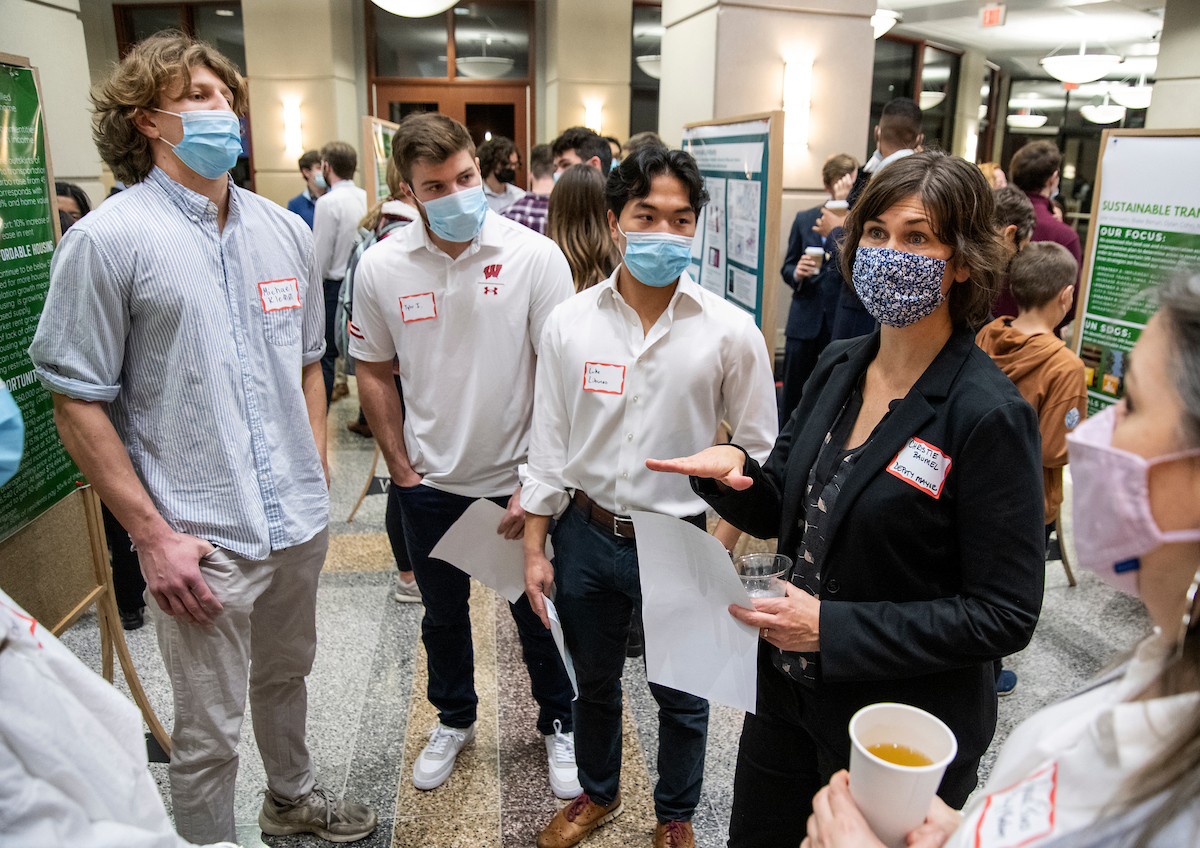 University of Wisconsin-Madison faculty and students are working together to achieve sustainability priorities by linking local plans to global goals through a partnership that connects two schools on campus with the City of Madison.

The collaborative effort includes a Civil Society and Community Leadership class taught by Lori DiPrete Brown in the School of Human Ecology and Urban and Regional Economics taught by Yongheng Deng in the Wisconsin School of Business, with support from UniverCity Alliance (UCA).

This work complements the City of Madison’s existing efforts to invest in a clean, healthy and more resilient future. It could also strengthen Madison’s status as a model in demonstrating the U.N.’s Sustainable Development Goals (SDGs) — a set of 17 interconnected global goals that are designed to be a “blueprint to achieve a better and more sustainable future for all,” according to the U.N.

“Sustainability does not just mean environment because every aspect of this is connected,” City of Madison Deputy Mayor Christie Baumel said to WSB students Dec. 15. “Economy, human health and wellbeing, environment — all these things are connected and interrelated.”

They suggested, among other recommendations, that the city provide incentives for using public transportation and support local composting efforts. One group also suggested that local public school curriculums include a class on housing that would include financial literacy, area housing resources and basic information on how to rent and buy property.

In addition to analysis related to sustainability, students researched best practices regarding restorative employment practices and support structures, like a mentorship program for BIPOC employees.

Doniqua Smith, a senior who analyzed what an antiracist leadership competency framework could look like in the city, said the course emphasized to her the importance of being a part of the solution and not the problem.

“If you’re just standing by, it’s still not helping the situation,” Smith said. “We need to not just be aware of (racism), but create opportunities for fairness.”

Both courses incorporated the UN’s SDGs, which were created in 2015 by the United Nations General Assembly and are meant to be achieved by 2030.

In 2019, Madison ranked fifth out of 105 cities evaluated by the UN’s Sustainable Development Solutions Network. The city’s status created interest in these projects because of the potential to leverage its high ranking to be a national leader in sustainable development. Wisconsin ranked 16th among 50 states, according to the 2021 US Report on Sustainable Development.

“The SDGs are a coherent framework to think about the complexity of the world we live in and how they’re so interconnected locally, nationwide, globally,” said Shen, who is also the teaching assistant for DiPrete Brown’s class.

Deng’s goal for his course was to guide students to take a “holistic view” of urban and housing economics, which includes challenges and solutions. Throughout the semester, his students reviewed actions and strategies within the City of Madison’s comprehensive plan, called Imagine Madison, and connected them with the UN’s SDGs in hopes of creating improved strategies for tracking progress on social and environmental sustainability.

“These group projects allow students to learn from the city and urban space they are studying and living in, and also provide students opportunities to influence people’s lives beyond the boundaries of the classroom,” Deng said.

Annika Strand, a senior in Deng’s course, analyzed zoning laws in Madison for her final project and appreciated working with a tangible issue.

“I really enjoyed that we actually got to take something in the City of Madison’s community and analyze it through our course material and actually get to apply it and be creative and make our own suggestions,” Strand said.

Likewise, Hannah Reynolds, a junior in the Civil Society and Community Leadership class, said working toward solving an issue is “valuable” and “adds a whole level to education” by solidifying class material.

‘Bridge the gap’ between city, campus

Kratowicz, who is also a member of UCA’s advisory board, called the partnership a model for future collaborative efforts between the city and UCA.

“UCA has existed for years prior to this partnership with the City of Madison,” Kratowicz said. “It was a little surprising to us that in our own backyard we didn’t have this effort to bridge the gap between UW-Madison students and the folks here in local government who can learn from the insights you have to apply these concepts to real-world city problems we have in local government.”

UCA aims to be the primary entrypoint to the university when the City of Madison (and local government in general) has a research question to be answered. The relationship with the City of Madison developed from a MetroLab Network collaboration — an international partnership focused on civic research and innovation — in 2015.

“Local government plays an essential role in realizing social good for everyone,” said DiPrete Brown, who, in addition to serving as a co-chair of  UniverCity Alliance, is an associate director of the Global Health Institute and the founding director of the campus-wide 4W Women and Well-being Initiative.

“UW-Madison has a responsibility as an anchor institution in the city,” she said. “I, like so many of our faculty, want to contribute to impactful, well-coordinated efforts that align with the City of Madison’s plans and add value to the work.

Underscoring the importance of the relationship between the city and UW-Madison, UniverCity Alliance Managing Director Gavin Luter said partnership with the city — and the opportunity it provides students — makes the university stronger.

“We are a better university because of what you’re doing and what you’re willing to do with us,” Luter said while addressing city officials. “These students learned a lot of things that are not written down in textbooks. You all are helping us be a world renowned university.”