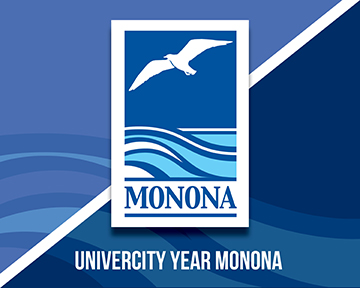 The City of Monona is a small community of almost 8,000 residents located on the east shore of Lake Monona and 7 miles from the University of Wisconsin-Madison campus. It was incorporated as a village in 1938 and during the 1950s experienced substantial population growth. After annexing several properties for residential, commercial and industrial growth, Monona eventually became landlocked. It is now the oldest community in Dane County and is seeking solutions to its aging housing stock, how to grow without the ability to expand, and how to preserve its small-town community feel and natural resources during redevelopment.

Because of its close proximity to the university, and the strong support of Mayor Bob Miller, Monona was chosen for the inaugural year of the UniverCity Year program at UW-Madison during the 2016-2017 academic year. The partnership garnered much media coverage.

Learn more about the UniverCity Year Monona projects, and hear feedback from Monona staff and community, in this video by the City of Monona.

Executive summaries of UniverCity Year Monona are now available in our year-end report.

How can we ensure Monona parks will be enjoyed by all for generations to come?

How can we make transportation safer and more accessible?

How can Monona connect citizens and communicate effectively in a new era of technological innovation?

Students helped revamp the city’s digital resources for residents. Targets included researching the costs and benefits of a citywide Wi-Fi infrastructure, improving the usability of the city website, expanding the city’s presence on social media and providing programming for the community radio station.

How do we balance the need for stability while addressing community change and redevelopment opportunities?

Students examined the current housing climate in Monona to inform redevelopment goals and select sites for redevelopment. Focus areas included affordable housing, preservation of single-family neighborhoods, and development of mixed-use and commercial real estate to draw new families and businesses to the City of Monona.